The viral TikTok Baked Oatmeal recipe, made without peanut butter! Old fashioned oats, milk, banana, eggs, maple syrup, baking powder, and cinnamon are blended up and baked with chocolate chips for a healthy and delicious breakfast!

Apparently baked oatmeal is very trendy right now. This is a good thing because I have quite a few baked oatmeal recipes on my blog! There’s a Zucchini Baked Oatmeal and Peanut Butter and Jelly Baked Oatmeal, just to name a couple. The viral baked oatmeal recipe that has been going around Tik Tok, is a blended version. Meaning, you put all of the ingredients in a blender and puree until its a smooth batter.

I made my version similar to the viral Tik Tok baked oatmeal recipe, but not exact. For one, I increased the ingredients to make an 8×8″ pan of baked oatmeal. The original version was a smaller portion. I also omitted the peanut butter so the flavor is more from the banana and cinnamon.

Old Fashioned Oats – I wouldn’t recipe using quick oats in this recipe, as I haven’t tried it and I think you would get a different texture

Milk – you can use any kind of milk. I have used 2% and unsweetened vanilla almond milk with great results.

Banana – the more ripe, the better, as it will lend a natural sweetness to the baked oatmeal.

Eggs – two large eggs are used in this recipe.

Maple Syrup – just a couple of tablespoons of maple syrup is all this recipe needs for sweetness, as it gets a lot of natural sugar from the banana.

The hype is definitely worth it! This viral baked oatmeal is super delicious and totally filling for breakfast. It basically tastes like cake for breakfast – I can definitely get behind that trend! 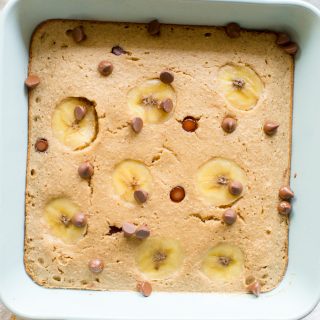