Eggnog Pudding Layer Dessert is a creamy pudding layer dessert that is perfect for a crowd!

Okay, so I’ve come to learn that people feel very strongly about eggnog.  Either you love it or hate it.  Me?  I love it.

I love drinking it from a mug (half eggnog half milk obvi), in my muffins, in my biscotti, in my cake, and even in my cinnamon rolls.

And now?  In this super creamy and delicious Eggnog Pudding Layer Dessert.  Oh. Mah. Gawd.  Layers and layers of amazingness.

So what kind of layers do we have going on here?

Well, first we have the Oreo crumb crust.  Obviously it’s not your typical Oreo – I used the Golden Oreos.  With melted butter.  Perfect and simple.

Then we have a creamy dreamy eggnog and cream cheese layer.  It’s part tangy from the cream cheese and part sweet and eggnog-y from the (duh) eggnog.

Next up: the pudding layer!  I used white chocolate pudding and more eggnog.

If I had one word for this dessert, it would be RICH.  I mean, that’s kind of eggnog’s nature, right?  Like, can anyone *really* drink a glass of eggnog without thinning it out with some milk first?  I can’t.

It’s one of those desserts that you don’t need a huge piece of.  It’s satisfying in every single way.  That is, if you’re not on the anti-eggnog team.

Since this makes a pretty large 9×13″ pan, this is perfect for a holiday party dessert!  Have a Christmas potluck coming up at work?  Hosting a holiday dinner?  Going to grandmas for her annual Christmas Eve get-together?  This Eggnog Pudding Layer Dessert is the dessert you need to bring! 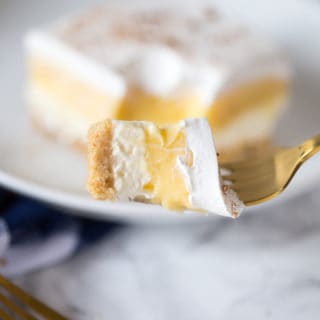 For the cream cheese layer:

For the pudding layer:

For the whipped topping:

To make the crust:

To make the cream cheese layer:

To make the pudding layer:

Click here or on the image below to pin this Eggnog Pudding Layer Dessert recipe for later!

2 Comments
Join The Conversation
Hi! Welcome to greens & chocolate, where healthy cooking meets sinful indulgence. I'm Taylor, a Minnesota girl who loves eating healthy, a daily chocolate indulgence, and running, yoga, and chasing after my sons to balance it all out. I'm so happy you stopped by, and hope you enjoy the recipes I have to share!
More About Taylor