Get the holidays rocking with this Boozy Eggnog Bundt Cake!  The eggnog and rum spiced cake is drenched in a eggnog and rum glaze, and then topped with an irresistible eggnog buttercream frosting.  It is to-die-for!

This past weekend we headed up north to the cabin for one of the most relaxing weekends I’ve had all year.  It was so, so, SO nice to leave our computers, errands, and house chores behind and feel no obligations to do anything the entire weekend.

Usually this time of year there’s a good amount of snow in the ground in northern Minnesota, but aside from being in the high 30’s there wasn’t any snow to begin with.  So instead of our usual active getaway weekends spent snowshoeing and cross country skiing, we did a lot of sleeping in, eating, and reading instead.  It was glorious.

While I spent a good chunk of Saturday knitting and reading, I couldn’t help but take advance of the big and beautiful cabin kitchen to do some holiday baking.  I knocked off peanut butter blossoms, fudge, caramel corn, saltine toffee, and almond jam cookies off my list.  Now I’m feeling even more ready for Christmas.  Plus, it wasn’t “work” time in the kitchen, but more of the kitchen time when I feel more relaxed when I’m finished.  Win, win.

Another holiday recipe that I checked off my list last week is this new Boozy Eggnog Bundt Cake.  I can’t get enough of the ‘nog this time of year.  As soon as I saw it at the grocery store I stocked up with a couple of cartons.  Y’know – one for chugging, and one for baking.  It’s how I roll.

This Boozy Eggnog Bundt Cake is also definitely not lacking in the eggnog flavor.  There is eggnog in the cake, glaze, AND frosting.  It doesn’t get more egg noggy than that.

I think what makes this boozy eggnog bundt cake special is the eggnog and bourbon glaze.  It get poured over the cake directly out of the oven.  Since the cake is still warm, it soaks up the glaze. This keeps the cake super moist and really brought out the eggnog (and bourbon!) flavor in the cake.

Of course I couldn’t leave it just like that, and went ahead and added an eggnog buttercream frosting to the top.  I am 100% a frosting girl, so for me – the frosting makes the cake.

With the eggnog flavors and hint of bourbon, this is such a fun holiday dessert.  Especially this time of year, who doesn’t like a little booze in their dessert? 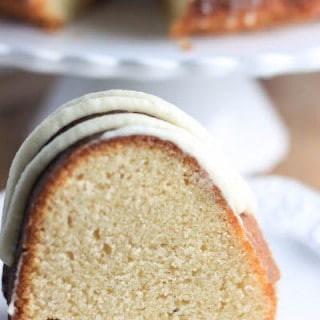 Click here or the image below to pin this Boozy Eggnog Bundt Cake recipe for later!

13 Comments
Join The Conversation
Hi! Welcome to greens & chocolate, where healthy cooking meets sinful indulgence. I'm Taylor, a Minnesota girl who loves eating healthy, a daily chocolate indulgence, and running, yoga, and chasing after my sons to balance it all out. I'm so happy you stopped by, and hope you enjoy the recipes I have to share!
More About Taylor