No Bake Eggnog Cheesecake is the ultimate eggnog dessert, made with cream cheese, eggnog, and Cool Whip!

It would be really hard for me to have to choose my favorite holiday flavor (thank goodness I don’t actually have to!) but I think it would be eggnog. Or maybe peppermint. No wait, eggnog. GAH! Regardless, when this time of the year rolls around, I buy a few cartons of the ‘nog and dream up all of the ways I can use it aside from chugging it. This No Bake Eggnog Cheesecake was my first creation this year and holy moly it’s freaking delicious.

Ingredients in No Bake Eggnog Cheesecake

The ingredient line up for No Bake Egg Nog Cheesecake is pretty straight forward. The crust is a basic graham cracker crust with graham cracker crumbs and bacon. I like a lot of crust in my cheesecakes, so it is enough of a crust to go up the sides of the springform pan.

For the filling, it gets its creaminess from the cream cheese and Cool Whip, and the flavor from the sugar, eggnog, cinnamon, nutmeg, and vanilla. You could use homemade whipped cream if you don’t prefer Cool Whip, but I happen to love the stuff!

How to Make Eggnog Cheesecake

First, you’ll make the crust. It’s a simple combination of graham cracker crumbs and butter that is mixed together until well combined and then pressed into the bottom of a springform pan.

For the filling, start by beating the cream cheese until it’s pretty creamy, about two minutes. Next, add the sugar, eggnog, vanilla, and spices to combine well.

Lastly, you fold in the Cool Whip. I suggest folding instead of beating because you don’t want to beat the air out of the Cool Whip. Folding it in gently will keep it nice and fluffy.

The eggnog cheesecake needs a couple of hours, ideally overnight, to chill and set up. I also tried this cheesecake in the freezer but Marc and I agreed it was much better and creamier when refrigerated. 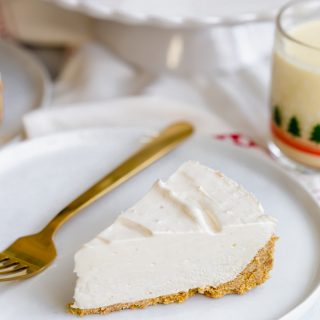