If you think Lobster Macaroni and Cheese sounds indulgent, you are RIGHT! Save this one for a special occasion like Christmas, New Years Eve, or an anniversary – it is worth it!

Does it really get more indulgent than homemade macaroni and cheese with lobster in it? I don’t think so. I think this year it’s about time we treat ourselves, though, and this Lobster Macaroni and Cheese is the perfect way to do it.

It’s no doubt all of our Christmas gatherings will be much smaller this year, and a lot of people it will just be with your immediate family. Why not break the tradition of beef tenderloin or ham and make this macaroni and cheese instead?

Ingredients in Lobster Macaroni and Cheese

Lobster Tails – These are much less intimidating to cook than an entire lobster! I used two in this recipe which was enough but not overwhelming. If you want more, go for it and add three or four!

Large Elbow Macaroni – You can really use whatever your favorite pasta shape is, aside from long pastas like fettuccine, spaghetti, or angel hair. I think rigatoni, shells, or campanelle would work great.

Butter – along with the flour is used for making the creamy cheese sauce., and used with breadcrumbs for the topping.

Heavy Cream – Essential for the creaminess of the cheese sauce!

Breadcrumbs – for a buttery, crunchy topping.

Parsley – for a little green on top. Not necessary but pretty!

How to Make Lobster Mac and Cheese

This lobster macaroni and cheese recipe starts with cooking the lobster. I boiled it, but there are a few other ways you can do it, such as in the oven, broiler, grill, or steamer. If you don’t want to boil it, check out this page for instructions on alternate ways.

While the lobster is cooking, you can also boil the pasta and start on the cheese sauce.

To make the cheese sauce, start by melting butter. Once the butter is melted, stir in the flour. The flour is cooked for just a minute, and then start slowly adding the milk and heavy cream. Whisk constantly while adding it so the milk/cream gets incorporated into the butter/flour mixture to result in a thick cream sauce.

Next, add the spices and salt, followed by all of the cheeses. Stir until the cheese is melted and then combine with the cooked pasta and cooked and chopped lobster. It will seem very saucy but believe me – that’s a good thing! And the pasta will soak up some of the sauce as it cooks. Add this mixture to a greased baking pan.

Last, make the breadcrumb topping by mixing together the melted butter, breadcrumbs, and a bit of salt. Sprinkle it over the mac and cheese and then bake in the oven for about 30 minutes – until it’s bubbling and golden brown.

It’s no surprise that this macaroni and cheese with lobster recipe was a HIT. Oh man is it good! We served it with a simple side salad and some fresh sourdough bread because obviously we needed more carbs. 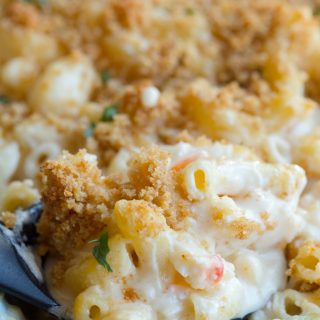