Cinnamon Roll Monkey Bread is a genius mash up of what happens when you make monkey bread with canned cinnamon rolls. It’s absolutely delicious!

Holy moly do I have a recipe for you guys today. It might be Monday, but I’m starting this week with a bang and it’s called Cinnamon Roll Monkey Bread. Seriously, there’s really no acceptable way to ever make monkey bread again, except for with cinnamon rolls.

This recipe is just as easy as the monkey bread we’re all used to that is made with canned biscuits. The only real difference is that instead of biscuits, we’re using canned cinnamon rolls. SO GOOD!

Here’s how easy it is. Step 1: buy two cans of cinnamon rolls and don’t even feel bad about it. Step 2: cut all of the cinnamon rolls up into quarters, toss it in some cinnamon sugar, and drizzle it with melted butter and brown sugar in a bundt ban. Bake. Top with the can of frosting and DEVOUR. That is IT, people!

This easy monkey bread is perfect for a group breakfast. I’m thinking a week at a cabin, when you’re home visiting your family, a girls weekend, maybe even Christmas?!

What Kind of Cinnamon Rolls Do You Use?

You can really use any kind of canned cinnamon rolls that you find in the refrigerated section at the grocery store. I love using Annie’s Organic Cinnamon Rolls, because I know they are made with cleaner ingredients than other brands, but TBH, I went straight up Pillsbury for this recipe. DEEELISH.

This recipe for Cinnamon Roll Monkey Bread is a new favorite in our house for special mornings, and I’m sure it will be in yours, too! 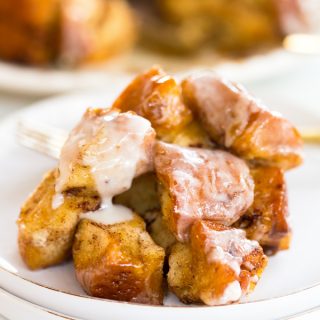