So my birthday is on Saturday.  Usually I don’t get too excited about my own birthday but this year I feel like celebrating all. month. long.  Not sure why, I’m just turning 27.  Nothing too monumental, but I keep making excuses to Marc for every indulgent thing I do, saying “it’s my birthday month!  I do what I want!”  Okay, maybe I haven’t been that much of a brat about my birthday the entire month, but I certainly am celebrating my birthday week.  I started promptly on Sunday morning, by making this beauty of a coffee cake.  What better way to kick off birthday week than breakfast cake?

I originally had the craving for cinnamon rolls, but definitely not the patience, so I wanted a way to make myself think that I was eating a cinnamon roll, without having to make them.  This coffee cake does just that.  The cake is soft, sweet, and cinnamon flavored, topped with a brown sugar and butter mixture, which mimics the filling of a cinnamon roll.  The entire thing is generously glazed with a cream cheese frosting.  I may never make real cinnamon rolls again.

The recipe was inspired from one of my favorite blogs Averie Cooks, who makes deeeeelicious looking desserts and meals and takes beautiful pictures too.  I adapted her recipe by using yogurt instead of sour cream, and a little less of the topping to lighten up on the butter and sugar.  This obviously makes me feel better for the gigantic piece I ate, followed by  a million itty-bitty slivers that don’t count.

Needless to say, this coffee cake was pretty amazing.  And when I say amazing, I mean it’s all gone.  As in, Marc and I ate the whole thing in 2 days.  Whatever, it’s my birthday week.  I do what I want. 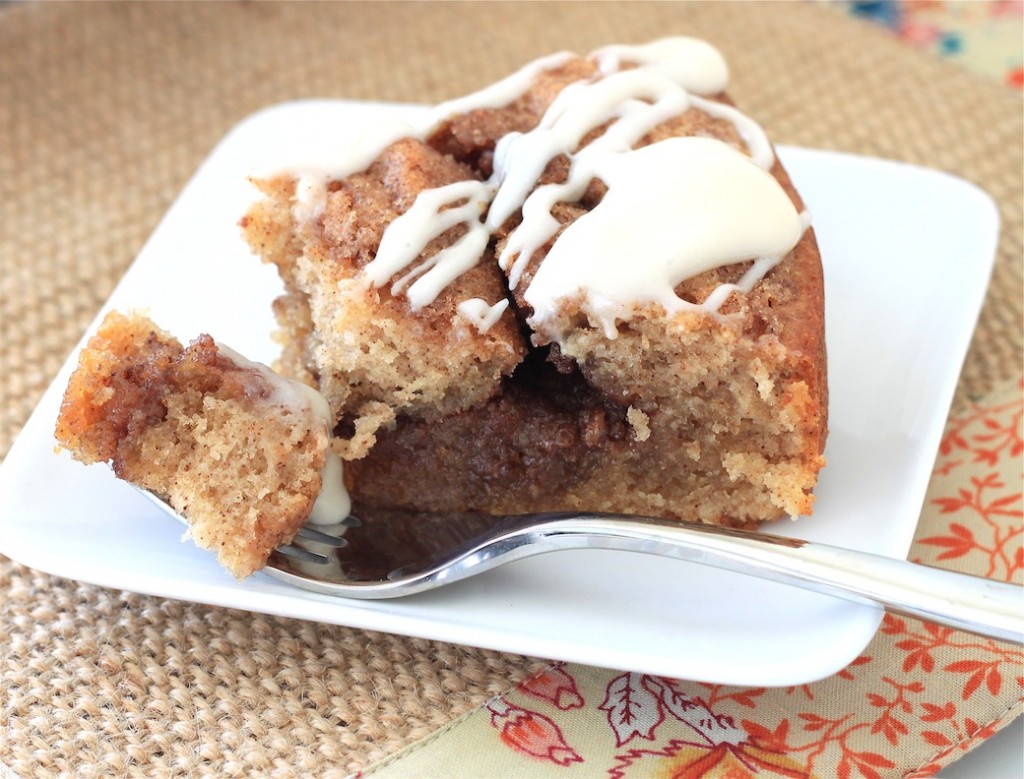 to make the cake:

to make the topping:

to make the glaze:

Tried this recipe?Mention @greensnchocolate to let me know!
Need more ideas?Find all of my recipe pins @greenschocolate
9 Comments
Join The Conversation
Hi! Welcome to greens & chocolate, where healthy cooking meets sinful indulgence. I'm Taylor, a Minnesota girl who loves eating healthy, a daily chocolate indulgence, and running, yoga, and chasing after my sons to balance it all out. I'm so happy you stopped by, and hope you enjoy the recipes I have to share!
More About Taylor