You will literally smell fall baking in your oven when you bake these heavenly Maple Muffins, which are filled with maple syrup and cinnamon, and rolled in cinnamon sugar!

Maple is a very under-appreciated flavors of fall, in my opinion. Everyone goes crazy for pumpkin spice and apple, but what about the warm flavor of maple syrup?! These Maple Muffins embrace the maple flavor and are a fall breakfast muffin that you will make over and over again.

Room Temperature Unsalted Butter – I always use unsalted butter when I am baking so I can control the salt. This recipe starts with 1/2 cup of room temperature butter, so be sure to set it out on the counter for about 30-60 minutes prior to baking.

Sugar and Maple Syrup – both of these sweeten the maple muffins and the maple syrup adds its flavor to the muffins that are named after it.

Vanilla Extract – This adds a hint of vanilla flavor. If you have maple extract, you could definitely use that instead of vanilla extract for an extra boost of maple flavor.

Sour Cream – this ensures the muffins are tender and moist.

How to Make Maple Muffins

Beat the butter and sugar. This muffin recipe for maple donut muffins starts by beating together room temperature butter and granulated sugar until it’s nice and creamy, about 2 minutes.

Add the dry ingredients. Stir in the baking powder, baking soda, and salt.

Transfer batter. The batter is divided among ten muffin cups in a muffin tin that have been greased with cooking spray.

Bake. Bake the muffins in a 375 degree oven for 15-17 minutes. You want the muffins to be a little golden around the edges and no longer sticky on the top. You can test the muffins with a toothpick.

Dip in butter and sugar. The muffins get brushed with melted butter and then dipped in a mixture of sugar and cinnamon. This is the part that makes them feel like you’re eating a sugar covered maple donut.

Cool. Cool the muffins on a wire rack.

Add some spices. This maple muffin is flavored with cinnamon but you could amp it up even more with 1/4 tsp of nutmeg and 1/4 tsp of ground ginger.

Swap sour cream for Greek Yogurt. You could easily use Greek Yogurt in this recipe in place of the sour cream, if that’s what you have on hand. I have used both with great results.

Storage. Store leftover muffins in an airtight container on the counter for 3-4 days. I like to warm mine in the microwave for 15 seconds. 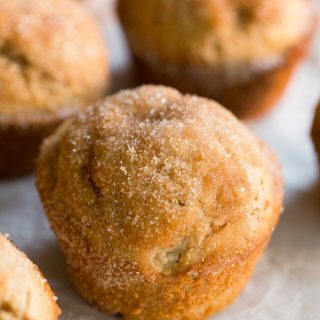