This Golden Milk Smoothie is super tasty and refreshing! In the end you will get a tropical tasting smoothie to brighten up a dreary winter morning!

Happy Monday!  Do I have a fun and delicious (and healthy!) recipe for you today.

Have you ever heard of golden milk?  While I’ve seen gorgeous photos of hot steamy mugs of golden milk on Instagram, I haven’t had the chance to try it.  And I guess that’s because I’m not exactly sure where to incorporate it into my day.  I can’t replace coffee with it because, let’s be honest, I can’t start my day without coffee.  After that, I don’t really think about warm beverages until nighttime when I have some herbal tea.

So basically what I’m saying is that I really wanted to get on the golden milk train but I just wasn’t sure how!  Until now.  I was thinking of an anti-inflammatory smoothie that I love to make with pineapple, mango, banana, and turmeric and thought – why don’t I just add my golden milk powder instead of the turmeric?

Golden milk powder (I use this brand – not sponsored) actually has black pepper in it, which allows for better absorption of the turmeric.  p.s. if you want to know the health benefits of turmeric, just google it.  But for a modified answer: it’s great for inflammation and has great antioxidant effects.

This smoothie ended up being super tasty and refreshing!  I simply combined frozen banana, pineapple, and mango with some almond milk, honey, Golden Milk powder, and some collagen peptides for some protein.  The result was a tropical tasting smoothie, that definitely brightened up a dreary winter morning!  It was just lightly sweetened. So, if you like things on the sweeter side, add another teaspoon or two of honey. 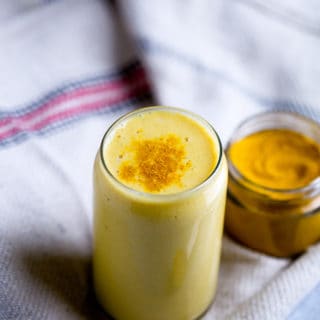 Click here or the image below to pin this Golden Milk Smoothie recipe for later!

IF YOU LIKE THIS RECIPE, YOU’LL LOVE THESE, TOO:

2 Comments
Join The Conversation
Hi! Welcome to greens & chocolate, where healthy cooking meets sinful indulgence. I'm Taylor, a Minnesota girl who loves eating healthy, a daily chocolate indulgence, and running, yoga, and chasing after my sons to balance it all out. I'm so happy you stopped by, and hope you enjoy the recipes I have to share!
More About Taylor