Cauliflower Corn Chowder is a lightened up chowder, full of vegetables, bacon, and flavor!

We’re nearing soup season and I couldn’t be more excited about it! For one, I love soup leftovers. For some reason they’re just way more appealing than regular leftovers.

Last, I just love all of the different ways you can make soup. Chowders are one of my favorites because they’re a combination of creamy and chunky. However, I’m not a fan of when chowders are full of cream. Delicious, sure. But I always try to lighten them up a little bit.

How to Make Cauliflower Corn Chowder

This recipe starts with the one and only: BACON! It adds so much flavor! A note for vegetarians: yes this can definitely be made without bacon. It obviously won’t have that bacon flavor but that’s kind of the point, right? 🙂 Instead of the bacon grease to saute the vegetables, just use about 2-3 tablespoons of olive oil.

So you’ll brown the bacon and then keep the bacon grease in the soup pot because that is used to saute the onions and garlic. Mmmmmm I can already smell the deliciousness happening!

After that, you simply add the cauliflower, potatoes, corn, and broth, and simmer until the cauliflower and potatoes are tender. I used fresh sweet corn that I cut off the cob, but you can use frozen or canned if you like.

To get the soup creamy and thick, you will puree about 2 cups of the soup in a blender and then add it back to the soup along with a flour and milk slurry. It’s so creamy without any cream!

To serve the Cauliflower Corn Chowder, we topped ours with that crispy bacon, some green onions or parsley, and shredded cheese. This soup is hearty, lightened up, and absolutely delicious! 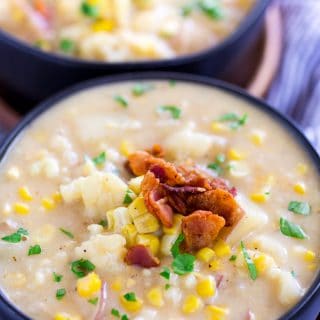