Banana pudding is a dessert that everyone loves. Who can resist a creamy dessert full of homemade vanilla pudding, whipped cream, bananas, and Nilla wafers?  I definitely cannot!

I’m taking banana pudding up a few notches by turning it into a layered trifle.  In addition to the traditional dessert components of banana pudding, this trifle has chunks of pound cake layered between the pudding, bananas, and whipped cream.

While many banana pudding recipes call for a couple of boxes of pudding mix, I wholeheartedly think it’s worth the extra 12 minutes to make homemade pudding.  I promise you, it isn’t difficult and it absolutely makes this trifle over-the-top delicious!

Not only is this Banana Pudding Trifle delicious, but it’s a show-stopper in looks, too.  A glass trifle bowl works best so you can show off all of the layers of this dessert and show everyone just how special this dessert is!

This is the perfect dessert for a backyard barbecue, Sunday supper, or a potluck.

We shared this dessert with neighbors and family and it received rave reviews all around.  I have to admit – we were regretting sharing so much of it!

How to Make Banana Pudding Trifle

First, you’ll want to make the homemade vanilla pudding. As I mentioned earlier, this isn’t difficult at all – just a little whisking of the ingredients on the stovetop, and some time for it to chill and set up completely. Pro tip: cover your pudding with a layer of plastic wrap so it doesn’t get a gooey film on top.

Next, make the homemade whipped cream. If you have an electric mixer, making whipped cream is painless and so easy. If you don’t have one or just want an arm workout, you can whip it by hand!

The last few steps just involve some cutting. Slice the bananas into thin slices. Cube the pound cake into bite-sized pieces. Then, you’ll layer it all up! 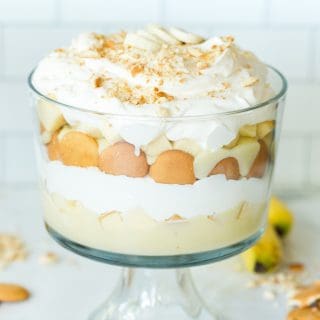