Have you ever had a food experience where you’re sad after it’s done? You know, where maybe it’s a meal that you’ve been really looking forward to for awhile, or it’s a completely new-to-you food that just happens to be incredible. This is exactly what  happened when we tried a new local restaurant a year ago and I randomly ordered their Pulled Pork Banh Mi. It
wasn’t even an authentic Vietnamese restaurant, but I had heard so many great things about Banh Mi’s and the pulled pork sounded intriguing. The verdict? Life changing, you guys.
It was so flipping good that I have dreams about that sandwich. Of course, it’s never been quite as good as that first time on our return visits, which leaves me wondering if I was just overly impressed as a Banh Mi first-timer, therefore setting high expectations, or if it really was a lot better that first time.

Regardless, I made it a mission to recreate it at home.
Before we get to the recipe, there are some requirements for  a good Banh Mi and I turned to the kitchn for some guidance

First, the bun must be chewy. You don’t want it to be hard and crunchy or overly soft like a hoagie bun, but instead you want a chewy crust with a soft inside. I did a little poking around at the grocery store bakery and found their “bake at home” mini baguettes had the perfect balance of soft but chewy crust.

Second, the cilantro. In the bites that I had in these sandwiches without cilantro I felt like something was missing. It adds just a bite of freshness and I made sure to load on the cilantro even more the second time.

Next, the pickled veggies. I’m including my recipe for super quick pickled radishes and carrots that you can make at home, or you could buy them pre-made if you prefer. Either way, I think they’re essential for that sour in the sandwich. To balance out the sour, you really want a good slathering of mayo on the sandwich. It adds a richness to the sandwich and while some places get fancy with flavored mayo/aioli, I stuck with plain so it didn’t get in the way of the other flavors from the pork and pickled veggies.

The last one that the kitchn recommends but I skipped was the chiles. I’m kind of a wuss when it comes to spicy food (except for my pregnancy hot sauce craving) and have been dealing with some pretty nasty heartburn (another unfortunate side effect of pregnancy) so it just seemed best to skip them altogether.

So there ya have it! All of the essentials for a killer bahn mi. But that still leaves us to talk about the pork. A lot of times you’ll
see bahn mi’s made with chunks of pork, instead of pulled pork.  I just couldn’t shake the pulled pork from my beloved first-time bahn mi and was stuck on the idea of making it with a pork shoulder in the slow cooker. The seasoning of the pork is super simple but does include one semi-specialty ingredient, which is fish sauce. I bought it at an Asian grocery store, but I know Thai Kitchen, a popular Asian brand found at major grocery stores, also makes fish sauce. If you can’t find it, I’m sure you can leave it out, just add vegetable or chicken broth instead.

So tell me – what food experiences have you had that leave you sad afterwards because it’s over, or you felt the need to rush home and make it yourself? 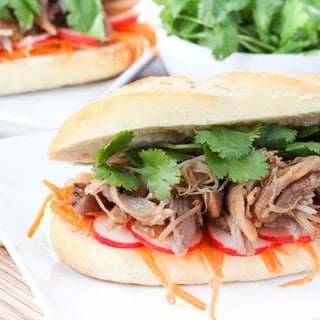 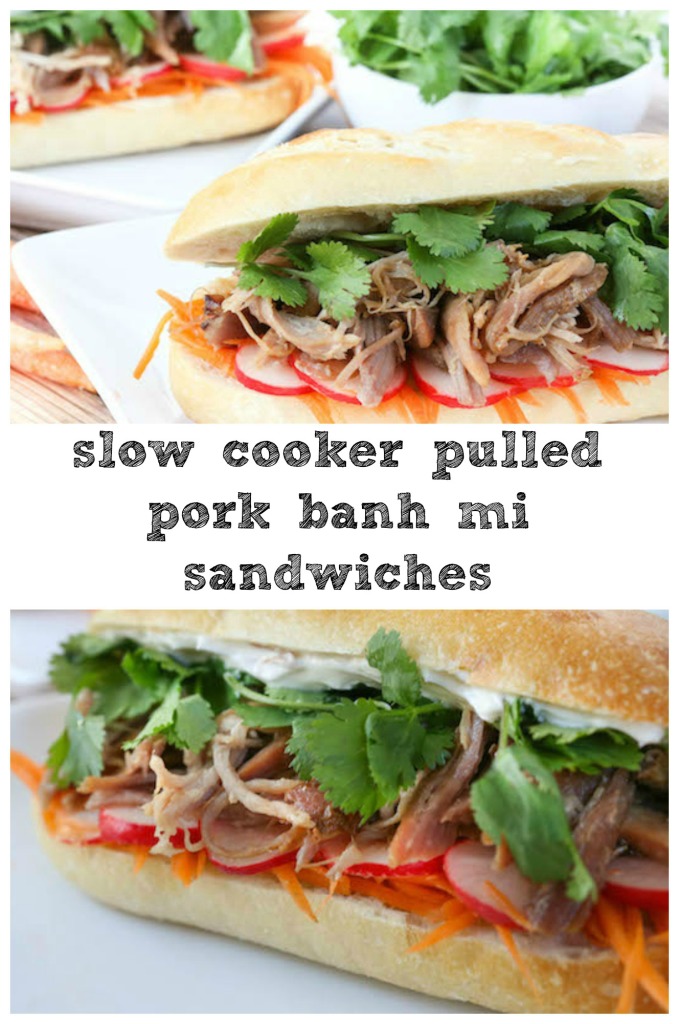 4 Comments
Join The Conversation
Hi! Welcome to greens & chocolate, where healthy cooking meets sinful indulgence. I'm Taylor, a Minnesota girl who loves eating healthy, a daily chocolate indulgence, and running, yoga, and chasing after my sons to balance it all out. I'm so happy you stopped by, and hope you enjoy the recipes I have to share!
More About Taylor