This One Skillet Creamy Bacon and Kale Gnocchi dish is comfort food at it’s best!

Do you ever have those weekends when you feel like you need another weekend to recover from it?  A few mama friends and I road tripped up to Duluth for a baby-free weekend which was SO much fun but man – going out is tiring!  Totally worth it, though.

I came home Sunday afternoon craving a big skillet of creamy gnocchi.  Ever since my Weeknight One Pot Spaghetti, I have been obsessed with one pot/skillet/pan dinners.  From One Pot Tortellini Primavera and One Skillet Mexican Chicken and Rice, to my my typical go-to weeknight dinner of a veggie hash with a runny egg on top.  Topped with some cheese and Sriracha and I’m one happy girl.

As good as all of those dishes are, I think I found a new favorite with this One Skillet Creamy Bacon and Kale Gnocchi.

I am such a huge fan of gnocchi but I don’t eat it nearly enough.  It’s so soft and fluffy – I just want to use it as a pillow and take a nap.  Is that weird?

While I won’t turn down gnocchi with a red sauce, I think it’s made for a super lush creamy sauce.  Then you add bacon and kale (a.k.a. two of my favorite things)?  OMG.  Sign. Me. Up.

I’m not super picky about my gnocchi, so I used the Archers Farm Gnocchi, but if you’re a frozen-gnocchi-only enthusiast, by all means use your favorite!  I’ve heard Delallo Gnocchi is pretty amazing.  Or make your own….more power to ya!  But then this dish will definitely not be one-skillet.  Using the pre-made gnocchi made this dish super simple and extremely quick to make.

While the bacon in this was super satisfying to me, you could definitely add some rotisserie chicken in here for some more protein.  You could also add other veggies like mushrooms or zucchini, too.  Oh and don’t forget the Parmesan cheese on top – it’s the best! 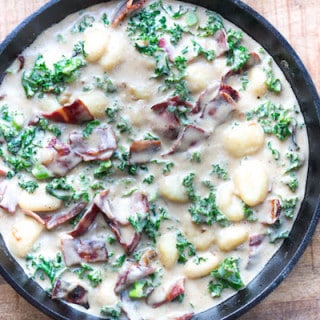 1 Comment
Join The Conversation
Hi! Welcome to greens & chocolate, where healthy cooking meets sinful indulgence. I'm Taylor, a Minnesota girl who loves eating healthy, a daily chocolate indulgence, and running, yoga, and chasing after my sons to balance it all out. I'm so happy you stopped by, and hope you enjoy the recipes I have to share!
More About Taylor