Who needs a campfire when you have No-Bake S’Mores Pie?! It has a simple graham cracker crust, a creamy filling made with marshmallow fluff, Cool Whip, cream cheese, and Hershey’s chocolate, and topped with crushed graham crackers and more chocolate!

As a family that loves to camp, we are also a family that loves a good ‘ol fashion s’more. What’s a campfire if you don’t have a bag of marshmallows to char and shove between some graham crackers with chocolate?! Not a good campfire, I tell ya! Sometimes, though, I find myself craving s’mores when we aren’t camping or having a campfire in our backyard. The solution? No Bake S’Mores Pie!

This pie is seriously unreal. It’s so, so good and comes together a lot more quickly than you might think!

Lastly, there’s more graham cracker crumbs to top it all off, along with some Hershey’s chocolate bars for garnish. More chocolate can never be a bad thing!

How to Make No-Bake S’Mores Pie

To start, make the graham cracker crust. You’ll crush 12 graham crackers in a food processor and then add 6 tablespoons of butter and pulse until it’s all combined. Press the mixture into a greased 9″ springform pan (or a pie dish works, too!), and then bake for 8 minutes at 350 degrees F. *Okay, so there is a *tiny* bit of baking in this recipe, but no-bake pies usually refer to the fact that the filling is no-bake!

While the crust is baking, make the filling. In a large bowl with an electric mixer, beat the cream cheese until it’s nice and creamy. Then add the extracts and marshmallow fluff, and beat until they’re well combined. Lastly, fold in the Cool Whip. At this point, you’ll spread half of the mixture onto the graham cracker crust. To the other half, add melted Hershey chocolate for the chocolate layer.

Spread the chocolate layer on top of the “marshmallow” layer. Lastly, sprinkle crushed graham crackers on top and then garnish with Hershey chocolate bars. That’s it! Chill the pie for at least 4 hours and then it’s ready to eat.

This pie is SUCH a crowd pleaser. I mean, who does like s’more and who doesn’t like pie?! Hint: no one that I want to be friends with 😉 This is such a fun dessert for a picnic, a BBQ, or any sort of potluck situation. Let me know in the comments or on Instagram if you make it! 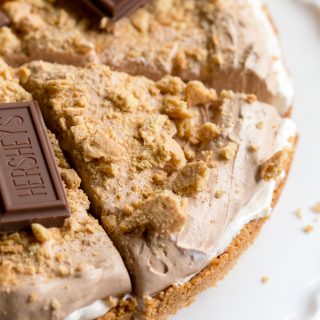