Instant Pot Chicken Enchilada Soup is a fun twist on chicken enchilada soup and is a breeze to make in your Instant Pot!

Raise your hand if you received an Instant Pot for Christmas!  I thought that might be the case.  The pressure cooker has become one of my favorite kitchen appliances over the past couple of years, and I love that it is gaining popularity.

I have a habit of giving simple, straight-forward recipes some sort of twist, and this Instant Pot Enchilada Soup is no different.  My original plan was an Instant Pot White Chicken Chili, but when I eyed a jar of enchilada sauce and a jar of salsa verde in our cupboard, the wheels started spinning.

I couldn’t decide between a salsa verde chicken chili or a chicken enchilada soup, but after a quick text to my recipe development team (aka my mom and aunt), we settled on Instant Pot Chicken Enchilada Soup.

I have to say – my team chose wisely.  This enchilada soup is delish!  Even better?  It is a dump and cook recipe.  Meaning, you dump all (but two) ingredients into the Instant Pot, and cook it.

So what exactly is in this chicken enchilada soup recipe?  There’s a lot of your typical enchilada ingredients – onion, bell pepper, chili powder, cumin, and lots of beans.  Then there’s shredded chicken breasts and a jar of enchilada sauce for that chicken enchilada flavor.

To finish things off, like I mentioned earlier, I added cream cheese and some shredded cheese for extra creaminess.  You just can’t go wrong with that, y’know?

It’s All About the Toppings!

Of course, like many soup recipes, one of the best parts of this Instant Pot Chicken Enchilada Soup is the stuff you top it with.  I know in the photo I only have some cheese and cilantro on top, but after my photoshoot I went a little crazy with other toppings.  I added some diced avocado, plain Greek yogurt, and a bunch of crushed tortilla chips.  SO good you guys.

If you’re new to the Instant Pot – this is a great recipe to start with!  You really can’t mess it up! 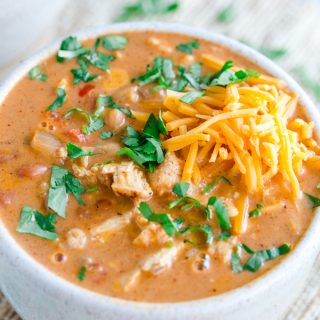 Tried this recipe?Mention @greensnchocolate to let me know!
Need more ideas?Find all of my recipe pins @greenschocolate
6 Comments
Join The Conversation
Hi! Welcome to greens & chocolate, where healthy cooking meets sinful indulgence. I'm Taylor, a Minnesota girl who loves eating healthy, a daily chocolate indulgence, and running, yoga, and chasing after my sons to balance it all out. I'm so happy you stopped by, and hope you enjoy the recipes I have to share!
More About Taylor