This Cranberry Glazed Ham recipe is brought to you by Minnesota Pork Board – did you know that Minnesota ranks 2nd in value and number of market pigs raised?!

A Christmas ham is such a perfect and beautiful main dish for the holidays. Not only is it a crowd pleaser, but spiraled hams are quite simple to make. Since spiral hams are already cooked, the main goal is to get the ham up to temperature all the way throughout, which is 145 degrees F. A delicious cranberry glaze and basting it in orange juice throughout the cooking process will ensure a tender, flavorful, and moist ham!

There are a few methods of roasting a spiraled ham, and in this ham recipe, instead of a honey glazed ham or a brown sugar glazed ham, I use a homemade cranberry glaze and then baste the ham in orange juice every once in awhile. The cranberry glazed adds a sweetness along with some warm spices to the salty ham, and the orange juice keeps the meat moist throughout.

How to Make Glaze for Ham

The ingredients are not many and very simple. You start by making the homemade cranberry glaze, which comes together within 15 minutes. You simply combine the cranberries, sugar, orange zest, water, orange juice, and spices in a small pot and simmer until the cranberries have popped open and you have a thickened sauce. It is such an easy ham glaze!

You take the cranberry glaze and brush or spread it all over the spiral ham. Then add orange juice to the bottom of your roasting pan, cover with foil, and roast for about 2 hours at 325 degrees F. Super easy!

What to Serve with Cranberry Glazed Ham: 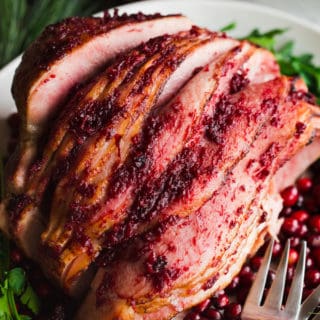 Tried this recipe?Mention @greensnchocolate to let me know!
Need more ideas?Find all of my recipe pins @greenschocolate
2 Comments
Join The Conversation
Hi! Welcome to greens & chocolate, where healthy cooking meets sinful indulgence. I'm Taylor, a Minnesota girl who loves eating healthy, a daily chocolate indulgence, and running, yoga, and chasing after my sons to balance it all out. I'm so happy you stopped by, and hope you enjoy the recipes I have to share!
More About Taylor