I love pork chops because they are economical, lean, and will really take on any flavor that you introduce to them. We are big fans of Thai flavors in our family, so I was really excited about this idea for Thai Peanut Pork Chops!

The steps to make these Thai Peanut Pork Chops are really quite simple.  You’ll start by making the Thai peanut sauce and coconut rice. The sauce is made in a food processor with ingredients such as peanut butter, coconut milk, Thai chili sauce, ginger, soy sauce, and garlic, which are pureed for a sauce that is bursting with flavor.

Once that is made, you will saute bell peppers and brown and cook the pork chops.  I am a huge believer in using a meat thermometer when cooking meat, which takes the guesswork out of cooking meats to a certain temperature. The cooking time can vary depending on the thickness of your pork chops and whether or not they are boneless or bone-in, so I would definitely recommend using a meat thermometer with pork chops!  I used bone-in pork chops in this recipe, but boneless would also work well.

Put it all together and dinner is served!  We topped it all off with a sprinkle of cilantro which is my favorite herb to pair with Thai peanut sauce.  The whole dinner was full of flavor and all of us loved it. Even though my kids can be picky with meat, I cut the pork into really small pieces and mixed it in with the coconut rice, and topped it with a bunch of peanut sauce.  They ate it all up!

If you’re wanting to make these Thai Peanut Pork Chops an even faster weeknight meal, you can make the Thai peanut sauce and chop up the bell peppers in advance.  This will cut down on about 10 minutes of prep time, which can be important when you’re rushing to get dinner on the table. Your family will love this meal and will be begging you to make it again!

One Skillet Italian Pork Chops from The Blond Cook 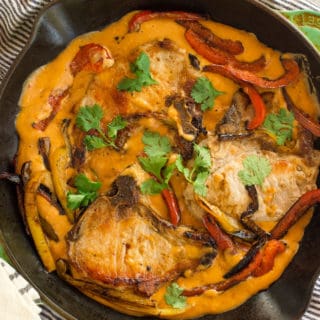 For the Thai Peanut Sauce:

For the Coconut Rice:

For the Peppers and Pork:

To Make the Thai Peanut Sauce:

To Make the Coconut Rice:

To Make the Peppers Pork Chops:

3 Comments
Join The Conversation
Hi! Welcome to greens & chocolate, where healthy cooking meets sinful indulgence. I'm Taylor, a Minnesota girl who loves eating healthy, a daily chocolate indulgence, and running, yoga, and chasing after my sons to balance it all out. I'm so happy you stopped by, and hope you enjoy the recipes I have to share!
More About Taylor