Chocolate Zucchini Bundt Cake is a delicious way to eat your chocolate cake and your veggies, too!

This zucchini bundt cake came about largely due to my two future sister-in-laws.  Let me explain.  The idea started when Marc’s sister-in-law Megan texted me to tell me that she had a bunch of zucchini from her parents garden and that if I wanted, I was welcome to have some.  Of course I said yes and I immediately started thinking of what I could bake with the zucchini.

When I went to get the zucchini from Megan, I looked in the bag she gave me and instead of zucchini, I saw cucumbers.  Apparently Megan’s dad had picked from the wrong garden and accidentally took somebody else’s cucumbers, thinking they were his zucchini!  Too funny.

Even though I came home zucchini-less, I was still ready to make some zucchini baked goods, so I stopped at the store and bought a bunch of zucchinis.  First up, I made Joy the Baker’s Zucchini Sweet Potato Bread (using melted butter instead of oil and no nuts or cranberries).

Unfortunately I left the loaf a little too close to the edge of the counter and Maddie ended up enjoying more of it than Marc and I.  The slices that we did get, however, were delicious!

Left with a couple more zucchinis and my other future sister-in-law’s birthday coming up, I decided to make a zucchini cake.  I had originally thought of making a zucchini cake with cream cheese frosting but one thing led to another and surprise, surprise, I ended up making it a chocolate cake with chocolate frosting.

And I’m so glad I did.  This cake turned out incredibly moist and rich, from the addition of oil and the zucchini. If I hadn’t made it myself, I would’ve had no clue there was zucchini in it.  I chose to top the cake with a light and fluffy buttercream frosting and it ended up pairing perfectly with the chocolate-y cake.  It was a perfect way to use up an abundance of zucchini! 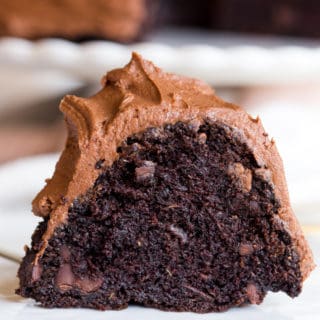