Do you ever eat something at a restaurant and then can’t stop thinking about it for days afterwards?  This happened to Marc and I after we ate at Busters on 28th and ordered the Beer Braised Beef Sandwich with Chipotle Cream Cheese.  We even went back and had the same sandwich and still couldn’t stop thinking about it!  So I took the matter into my own hands and set out to eat it again…by making it myself.

This seemed easy enough.  I mean, I’ve made lots of slow cooked beef sandwiches, like Italian Beef Sandwiches and Southwestern Shredded Beef Sandwiches.  The thing was, it was the sauce that the beef was in that made the sandwiches we had at Busters so good.  It was thick and creamy.  Flavorful and unforgettable.  Unlike any of the other shredded beef sandwiches I’ve ever made.

So here’s what I did.  I braised the beef in a beer broth with carrots, onions, and celery.  Then when the beef was fork tender after slow cooking for hours, I took the beef out of the broth, added some dijon mustard to the broth to give it a bit of tang, then used an immersion blender to thickened it up.  After shredding the beef I put it back into the thickened sauce and gave it a taste.  I couldn’t believe it myself, but it was almost a perfect match to what we had at Busters. I loved how creamy the beef became from the thickened sauce and I think the real secret in the flavor was the addition of dijon mustard.  Not overpowering, but just enough to give it that special something.

Then there’s the chipotle cream cheese sauce.  While I wouldn’t have thought to put it on beer braised beef sandwiches, it worked perfectly at Buster’s so I didn’t want to leave it out.  I also wanted it to be a creamy sauce, not a spread, so I made it on the stove.  I started by sauteing some onions and garlic, then added chipotle en adobo, some spices, cream cheese, and milk.  It was delicious on it’s own and spread on the sandwiches it took both Marc and I straight back to Buster’s.  I kinda nailed it.

If you’re a beef eater, you really must give this recipe a try.  Marc and I both absolutely loved it.  A note on the cooking method of the beef – you can make it in a slow cooker or in the oven in a dutch oven.  Both methods start by searing the beef on both sides to create a nice crust on the roast, then partially sauteing the vegetables and combining them with the beer and broth.  If you’re going to make it in a slow cooker, you can then just transfer everything to the slow cooker and let it cook all day, and if you’re going to make it in the dutch oven, you can just pop it in the oven.  To make this an easy weeknight meal I would suggest cooking it in the slow cooker, doing all of the searing and sauteing the night before, refrigerating it overnight, then the morning of just turn it on.  You could also make the cream cheese sauce in advance, then just re-heat prior to serving. 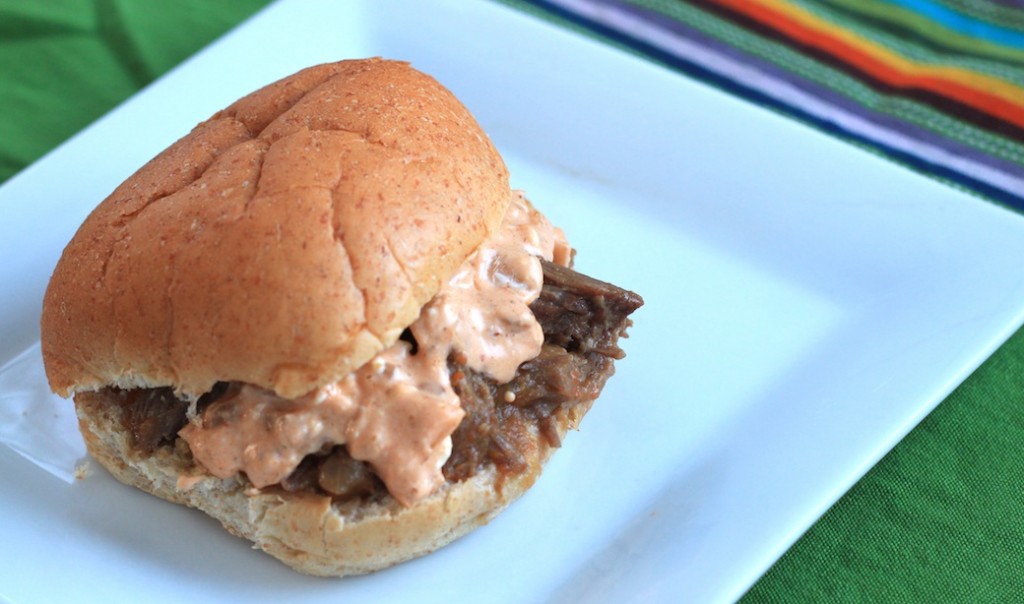 for the chipotle cream cheese sauce:

to make the beef:

Tried this recipe?Mention @greensnchocolate to let me know!
Need more ideas?Find all of my recipe pins @greenschocolate
6 Comments
Join The Conversation
Hi! Welcome to greens & chocolate, where healthy cooking meets sinful indulgence. I'm Taylor, a Minnesota girl who loves eating healthy, a daily chocolate indulgence, and running, yoga, and chasing after my sons to balance it all out. I'm so happy you stopped by, and hope you enjoy the recipes I have to share!
More About Taylor